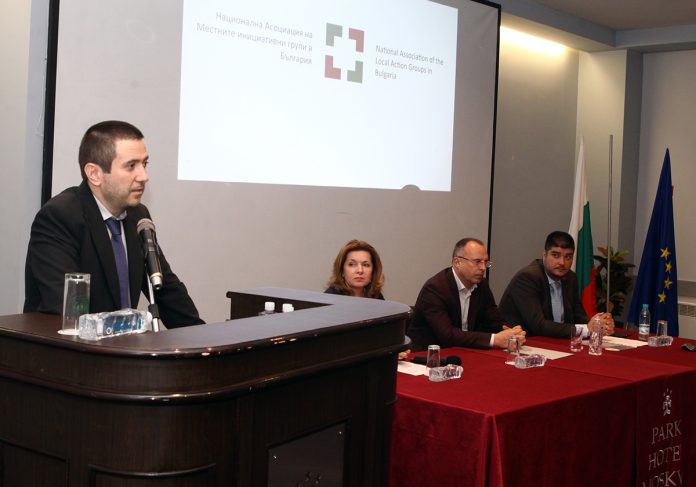 The recently-established National Association of the Local Action Groups in Bulgaria (NALAGB) was officially presented in Kiev Hall of Park Hotel Moskva (Park Hotel Moscow) on 26 April. The event was attended by Agriculture Minister Rumen Porozhanov, Deputy Education Minister Petar Nikolov, representatives of the National Association of The Municipalities in Republic of Bulgaria, heads of operational programmes, mayors and NALAGB directors. I’d like to welcome the establishment of the Association. Local action groups (LAG) are a highly important and already a well-developed part of the Rural Development Programme (RDP). The previous programming period was tough – every one of us was gaining experience. At present, there are signed contracts for 39 LAGs from the first admission and for another 29 LAGs, 15 of which have already signed a contract, six will be ready any moment now and four have some outstanding liabilities which will be settled. The option of multi-fund strategies provides you with an opportunity to develop your financing and activities outside the context of the RDP strands.
I, personally, welcome the set-up of an association, a working association at that, which will assist all of its members. I believe it would be very useful to have a single centre where you can share your problems and communicate with state institutions and the numerous managing authorities of the various funds. Thus, the Association could be a very useful instrument when every one of you has to deal with similar issues. What I could promise is that the Ministry, as a managing authority, alongside the Paying Agency will make sure to be fair to you.
Looking to the future, there is a quite active ongoing debate on the new common agricultural policy. Within the framework of the Bulgarian EU Presidency, we held a very active debate on the most important topics such as payment structure. Funding LAGs undoubtedly will remain a priority. I’d like to encourage you that the Common Agricultural Policy will be at the focus of the new programming period too and you will be able to carry on with your activities in the next decade. I’d like to wish success to all LAGs, to the managing authorities involved in this process. Dear Mr Stoychev,
Dear Ladies and Gentlemen,
It is my pleasure to congratulate you on the establishment of the National Association of the Local Action Groups in Bulgaria (NALAGB).
The dynamic environment local action groups (LAG) are developing in makes their task demanding, so I believe the set-up of such an association is a very adequate and timely step you have taken. It is really useful to support and encourage local entrepreneurship and the decentralized utilization of EU funds in the context of the upcoming talks over the next programming period and the negotiations over the new terms of funding EU policies.
The role of municipalities and small settlements will become increasingly important after 2020 and we should be ready to meet the new requirements. Otherwise, we wouldn’t be able to guarantee our country will receive the best.
I’m glad that, as a negotiator for the main regulation on the European Structural and Investment Funds after 2020, I can rely on your expert opinion and assessment.
I believe the ambitious objectives you have tasked the Association with are the right path for Bulgaria to becoming an increasingly better place to live in.
Respectfully,
Andrey Novakov

Stefan Spassov, head of Community-led Local Development unit with the Ministry of Agriculture, Food and Forestry I’d like to thank for the invitation on the behalf of the Ministry, the Managing Authority of the Rural Development Programme and all colleagues working on the LEADER approach. I’d like to congratulate you on establishment of the National Association of the Local Action Groups in Bulgaria! This is an initiative which is fully in line with the LEADER approach whose main principles, among others, are cooperation and networking. Everyone in the Ministry was very enthusiastic when we started and did not expect the difficulties which appeared later and which you all are familiar with. From my point of view and regarding my experience, the set-up of the Association is something necessary and it has our support and commendation. Let’s wish it good luck and success.

Simeon Petkov – National Association of Municipalities of the Republic of Bulgaria Dear Mayors, dear Colleagues! I’d like to congratulate you on establishing the Association on the behalf of the National Association of Municipalities. The local action groups (LAG) now cover over half of the municipalities and rural areas, and can rely on considerable financial resources allocated to them, especially regarding multi-fund financing. This is exactly why there is a need of a playing field for such an organization. There is lots of work that has to be done to simplify and optimize the conditions of the communication between LAGs and managing authorities. This is why we count on the Association to be the single voice which will stand for LAGs’ interest.

I welcome the establishment of the National Association of the Local Action Groups in Bulgaria on the behalf of the Ministry of Environment and Water. The administration processes and the communication with managing authorities is not very easy and I’m sure the set-up of the Association will considerably facilitate the communication. The Environment OP has allocated nearly BGN 40 million for 2014-2020, as BGN 18 million has been approved for eight multi-fund LAG strategies so far. We count on LAGs’ commitment to the measures for preservation of the natural habitats in Natura 2000 territories. Of course, we are ready directly to communicate with you in order to tackle LAGs’ problems. The Managing Authority is at your disposal to maintain operational communication because we believe such an initiative has future. I welcome the establishment of the Association and I hope we will work together even closer. We have considerable resources for multi-fund strategies but the local challenges are also serious. This is why we expect to receive strong support from you. I’d like you to know that you can rely on the Economy Ministry as a partner for achieving your objectives – boosting the development of a competitive business which introduces innovation on local level. The people applying LEADER know very well that local action groups (LAG) should be something more than a beneficiary to operational programmes. The approach, itself, is used outside the EU, there are LEADER networks there as well. The goal of LAGs is to turn into local investment centres at a certain point, so that the funding they receive to implement their objectives and projects is provided through other instruments, not only by operational programmes.
One of the Association’s main tasks is to make funding of LAGs possible outside the Republic of Bulgaria and the main goal is seeking direct funding from Brussels and other organizations.
With this regard, the establishment of a Bulgarian-based Balkan Association of the Local Action Groups is probably the most ambitious task we are consulting about. The idea is to have all Balkan associations like ours united in a single organization, which will interact directly with the European Commission.
Reaching this goal will, certainly, take time. Until then, building on the achievements of the LEADER network, with which we have established very good relations and respect it for its contribution to the sector, we will work on resolving old, inherited problems.
The LEADER approach was not recognized as a main instrument for the development of municipalities and rural areas during the first programming period. Operational programmes, themselves, did not provide the necessary expertise. Fortunately for us, the situation has been changing in the last few years, an increasing number of people have been acquiring expertise about applying the approach and their results are improving.
35 LAGs were approved in the first programming period. They had many tense moments working with the state administration but gained huge experience. Almost as many LAGs have been recently approved and are taking the same demanding path. Here comes our task – to ensure high-quality operational interaction among all LAGs, access to information about good practices and representation before institutions and managing authorities.
The nearest tasks we are starting to work on literally as of tomorrow, and we have already started working on some of them, include accepting new members, opening an office where to welcome all new members and tackle together the specific and concrete problems of each one of them.

An interview with Thibaut Guignard, President of Leader France 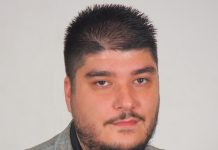 An interview with Kaloyan Stoychev, president of the National Association of the Local Action Groups in Bulgaria